The Rapidly Changing Early-Phase Environment in Immuno-Oncology Development: A Focus on Asia Pacific

Within an already high-risk/high-reward industry, oncology drug development stands out as one of the most risky and also most potentially rewarding therapeutic areas. Six of the 10 global top-selling drugs are oncologic therapies, but the overall chance of success is low, with only five percent of Phase I oncology therapies ultimately making it to market, and an even smaller percentage being true commercial successes. Clearly there would be tremendous financial and health benefits by improving these odds.

The oncology development landscape has also been transformed recently by the introduction of highly effective targeted therapies and immune-oncology products, e.g., the checkpoint inhibitors (CPIs), kinase inhibitors and antibody drug conjugates. With this move away from traditional cytotoxic agents, impressive gains in the level and duration of anti-tumor responses have been seen, together with substantial reductions in clinical development timelines and an increase in size of Phase I trials, which may now include long-running expansion cohorts.
Importantly, we have also seen the move to “biomarkerguided” approaches resulting in a two-to-three times higher chance of regulatory approval. Finally, the exponential growth in the number and type of studies (see Figure 1) has led to a dramatic increase in competition for investigators and patients alike, and a commensurate reduction in recruitment rates.

In parallel, the global marketplace is evolving rapidly, with the unprecedented rapid growth and development of China and other Asia Pacific markets. China is now the world’s second-largest pharmaceutical market, and sponsors need to consider how to position their future product for success in this highly dynamic marketplace.

These recent changes require that sponsors adopt a different development approach to remain successful in today’s increasingly competitive oncology environment. Ideally, they should also use a biomarker-guided strategy, adopt a global perspective for clinical trials and incorporate commercial planning into early clinical development.

Most importantly, to succeed and recruit strongly, trials today must include truly novel science and offer the prospect of meaningful improvements. Today’s capacity-constrained investigative sites are highly selective in regard to the new trials they will consider, and investigators and regulators both are increasingly less interested in copycat products or those offering only incremental benefit. 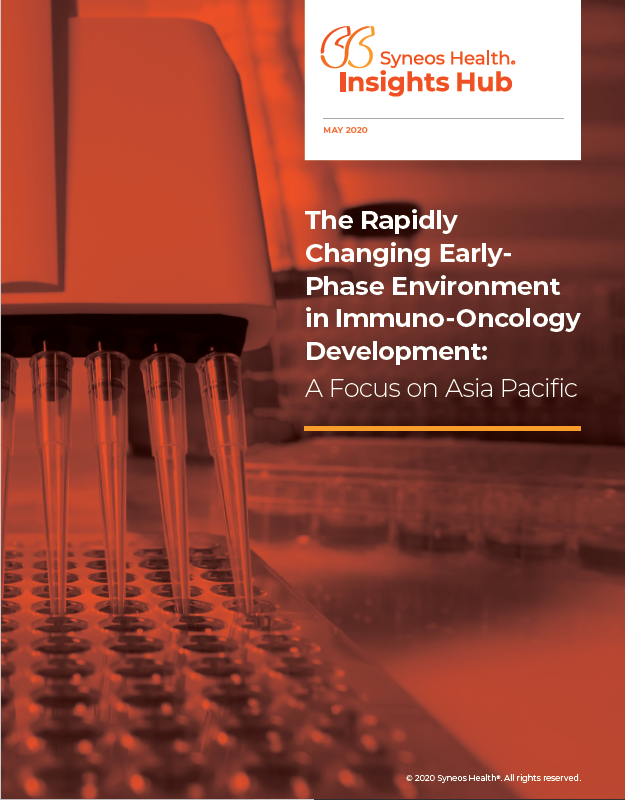 Best Practices in Long-Term Safety Follow-Up Studies in Oncology
April 28, 2020
Oncology EAPs: Your Five-Minute Download
May 29, 2019
The Changing Face of Immuno-Oncology Development: Managing the Complexity of Combination Therapy Trials
May 28, 2020